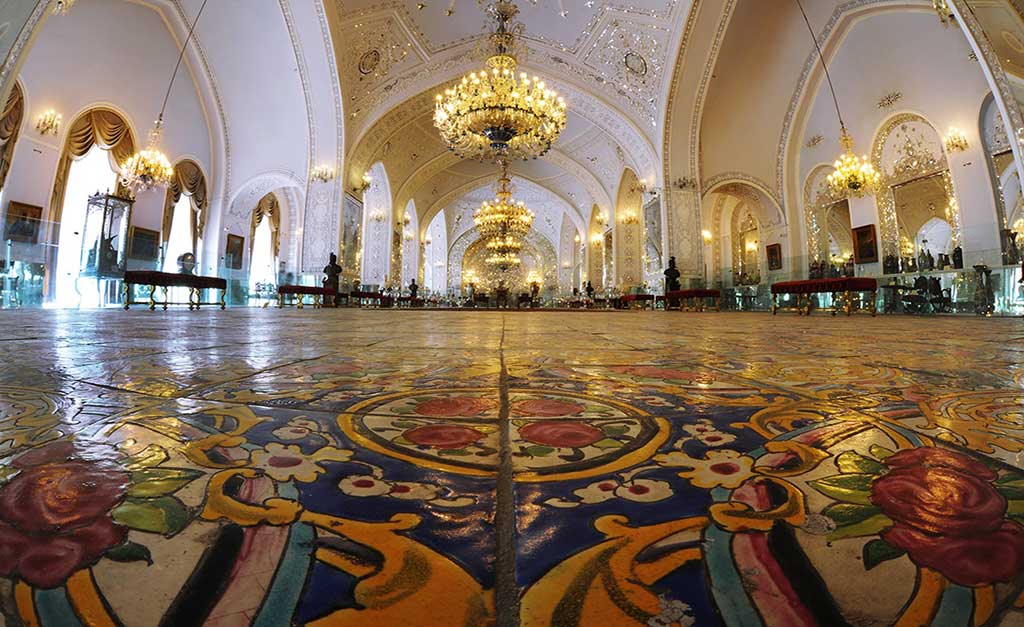 The lavish Golestan Palace is a masterpiece of the Qajar era, embodying the successful integration of earlier Persian crafts and architecture with Western influences. The walled Palace, one of the oldest groups of buildings in Tehran, became the seat of government of the Qajar family, which came into power in 1779 and made Tehran the capital of the country. Built around a garden featuring pools as well as planted areas, the Palace’s most characteristic features and rich ornaments date from the 19th century. It became a centre of Qajari arts and architecture of which it is an outstanding example and has remained a source of inspiration for Iranian artists and architects to this day. It represents a new style incorporating traditional Persian arts and crafts and elements of 18th century architecture and technology.

Golestan Palace is located in the heart and historic core of Tehran. The palace complex is one of the oldest in Tehran, originally built during the Safavid dynasty in the historic walled city. Following extensions and additions, it received its most characteristic features in the 19th century, when the palace complex was selected as the royal residence and seat of power by the Qajar ruling family. At present, Golestan Palace complex consists of eight key palace structures mostly used as museums and the eponymous gardens, a green shared centre of the complex, surrounded by an outer wall with gates.

The complex exemplifies architectural and artistic achievements of the Qajar era including the introduction of European motifs and styles into Persian arts. It was not only used as the governing base of the Qajari Kings but also functioned as a recreational and residential compound and a centre of artistic production in the 19th century. Through the latter activity, it became the source and centre of Qajari arts and architecture.

Golestan Palace represents a unique and rich testimony of the architectural language and decorative art during the Qajar era represented mostly in the legacy of Naser ed-Din Shah. It reflects artistic inspirations of European origin as the earliest representations of synthesized European and Persian style, which became so characteristic of Iranian art and architecture in the late 19th and 20th centuries. As such, parts of the palace complex can be seen as the origins of the modern Iranian artistic movement.

Criterion (ii): The complex of Golestan Palace represents an important example of the merging of Persian arts and architecture with European styles and motifs and the adaptation of European building technologies, such as the use of cast iron for load bearing, in Persia. As such Golestan Palace can be considered an exceptional example of an east-west synthesis in monumental arts, architectural layout and building technology, which has become a source of inspiration for modern Iranian artists and architects.

Criterion (iii): Golestan Palace contains the most complete representation of Qajari artistic and architectural production and bears witness to the centre of power and arts at the time. Hence, it is recognized as an exceptional testimony to the Qajari Era.

The delimitation of the palace compound includes all elements which convey the Outstanding Universal Value of the property. Although the Qajari architectural heritage of Golestan Palace has been much richer in the past and a considerable proportion of the palace complex has been demolished and replaced under successive rulers, all elements which have survived until the present time are included within the property boundaries.

At present the property is free of any acute threats, especially those which could compromise the visual perspectives into the wider landscape from within the palace compound. To ensure that this situation is retained in the future, emphasis should be given to the protection of visual perspectives from the inside of Golestan Palace and Gardens.

The characteristic architectural structures of the Qajari era retain authenticity in design and layout and have preserved the exceptional interior and exterior façade decorations. All conservation activities carried out have paid due respect to authenticity of material, design and workmanship. In addition, the palace complex has partly retained its use and function, in particular those galleries and wings that were created as museums during Qajari times. Many of the residential, representative and administrative rooms have changed purpose but the palace is still used as a location for contemporary state activities. It is probably the setting of the Qajari monuments that has changed most significantly during Pahlavi times and the authenticity of which is only retained in fragmented form. While this situation is acceptable in light of the demonstrated authenticity in material and design, it is essential that all remaining references to the historic Qajari setting of the property are carefully managed and preserved.

Golestan Palace is classified as a national monument according to the Law for Protection of National Heritage (1930). It has further been transferred into government ownership according to the Law Concerning the Acquisition of Land, Building and Premises for Protection of Historic Properties (1969) and is accordingly protected by both legislative means and property ownership. The buffer zone is protected by legal regulations, which were approved by ICHHTO. These limit construction and infrastructure developments, the cutting of trees, create a pedestrian zone and suggest a variety of measures for the improvement of facades and structures. It is important that the height restrictions in the buffer zone and wider surroundings of the historical district of Tehran are strictly observed to protect the sightlines from inside Golestan Palace complex.

The management of the property is guided by short, medium and long-term objectives which emphasize the conservation and restoration of the palace complex. Management responsibility lies with the Golestan Palace Base, a subsection of ICHHTO exclusively responsible for the property and functioning as a site management office. While management objectives have been presented, it would be desirable to develop a full management plan for the property, in which risk preparedness and risk response procedures should be given adequate attention.