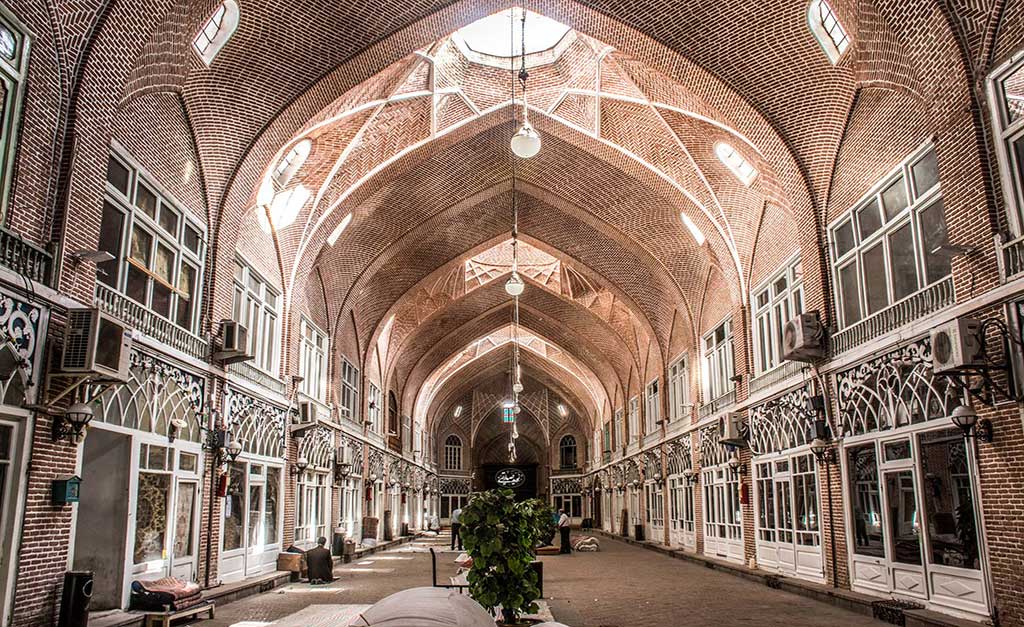 Tabriz has been a place of cultural exchange since antiquity and its historic bazaar complex is one of the most important commercial centres on the Silk Road. Tabriz Historic Bazaar Complex consists of a series of interconnected, covered, brick structures, buildings, and enclosed spaces for different functions. Tabriz and its Bazaar were already prosperous and famous in the 13th century, when the town, in the province of Eastern Azerbaijan, became the capital city of the Safavid kingdom. The city lost its status as capital in the 16th century, but remained important as a commercial hub until the end of the 18th century, with the expansion of Ottoman power. It is one of the most complete examples of the traditional commercial and cultural system of Iran.

Tabriz Historic Bazaar Complex, located along one of the most frequented east-west trade routes, consists of a series of interconnected, covered brick structures, buildings, and enclosed spaces for a variety of functions - commercial and trade-related activities, social gatherings, and educational and religious practices. Closely interwoven with the architectural fabric is the social and professional organization of the Bazaar, which has allowed it to function over the centuries and has made it into a single integrated entity.

Tabriz Historic Bazaar Complex has been one of the most important international places for commercial and cultural interchange, thanks to the centuries-old east-west trading connections and routes and to a wise policy of endowments and tax exemptions.

Tabriz Historic Bazaar bears witness to one of the most complete socio-cultural and commercial complexes among bazaars. It has developed over the centuries into an exceptional physical, economic, social, political, and religious complex, in which specialized architectural structures, functions, professions, and people from different cultures are integrated in a unique living environment. The lasting role of the Tabriz Bazaar is reflected in the layout of its fabric and in the highly diversified and reciprocally integrated architectural buildings and spaces, which have been a prototype for Persian urban planning.

Criterion (ii): Tabriz Historic Bazaar Complex was one of the most important international trade and cultural centres in Asia and the world between the 12th and the 18th centuries, thanks to the centuries-old east-west trade routes. Tabriz Bazaar is an exceptional example of an architectural-urban commercial area, which is reflected in its highly varied and integrated architectural buildings and spaces. The bazaar is one of the most sustainable socio-economic structures, and its great complexity and articulation attests to the wealth in trade and cultural interaction of Tabriz.

Criterion (iii): Tabriz Historic Bazaar bears witness to one of the most complete socio-cultural and commercial complexes among bazaars. It is an exceptional physical, economic, social, political, and religious complex that bears an exceptional testimony to a civilization that is still living. Over the centuries, thanks to its strategic location and to wise policies of endowments and tax exemptions, Tabriz Bazaar has developed into a socio-economic and cultural system in which specialized architectural structures, functions, professions, and people from different cultures are integrated into a unique living environment.

Criterion (iv): Tabriz Historic Bazaar is an outstanding example of an integrated multi-functional urban complex in which interconnected architectural structures and spaces have been shaped by commercial activities and related necessities. A large number of specialized buildings and structures are concentrated and reciprocally connected in a relatively compact area to form what is almost a single integrated structure.

The nominated property contains all the elements that are necessary to convey its significance. The integrity of the 18th century Tabriz Bazaar is well preserved and its architecture conserves a rich repertoire of commercial buildings; the connection between the physical structure and its functioning is still clearly legible, and in many cases alive.

The rich historical sources bear credible witness to the importance of the Tabriz Bazaar over history and to the permanence of its layout. The fabric of the Bazaar still exhibits the design, workmanship, and materials of the period when it was constructed after the 1780 earthquake. The Bazaar is still a lively and economically active place, attesting to its rich and long-lasting economic, social, and cultural exchanges.

The Tabriz Historic Bazaar Complex was officially protected in 1975 and since then has been covered by special stewardship measures. Three different protection areas have been established (a nominated area, a buffer zone, and a landscape zone), which are subject to special regulations, incorporated into the planning instruments. Within these areas any kind of activity needs authorization by the Iranian Cultural Heritage, Handicraft and Tourism Organization (ICHHTO), which is the institutional body in charge of the protection of protected monuments.

The management framework for the property is based on the integration of existing planning instruments (the Master Plan and the detailed Plan for Tabriz), administrative and technical bodies (the steering committee for Tabriz Bazaar and the ICHHTO Tabriz Bazaar Base), conservation objectives, SWOT analysis, implementation strategies, and operational programmes that are included in the management plan.