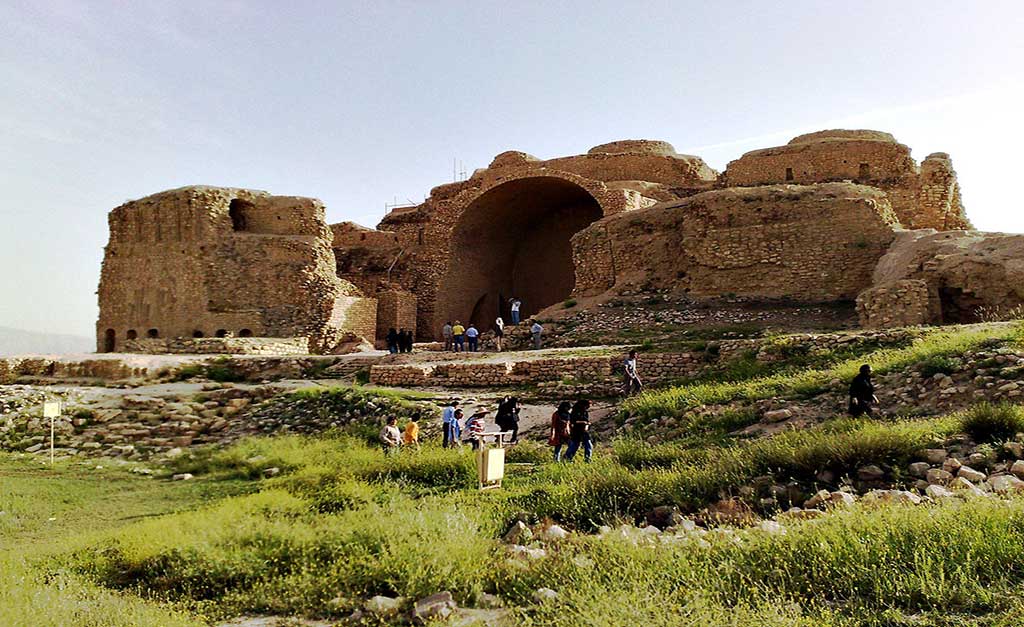 The eight archaeological sites situated in three geographical areas in the southeast of Fars Province: Firuzabad, Bishapur and Sarvestan. The fortified structures, palaces and city plans date back to the earliest and latest times of the Sassanian Empire, which stretched across the region from 224 to 658 CE. Among these sites is the capital built by the founder of the dynasty, Ardashir Papakan, as well as a city and architectural structures of his successor, Shapur I. The archaeological landscape reflects the optimized utilization of natural topography and bears witness to the influence of Achaemenid and Parthian cultural traditions and of Roman art, which had a significant impact on the architecture of the Islamic era.

The serial property Sassanid Archaeological Landscape of the Fars Region is composed of 8 selected archaeological site components in three geographical area contexts at Firuzabad, Bishapur and Sarvestan, all located in the Fars Province of southern Iran. The components include fortification structures, palaces, reliefs and city remains dating back to the earliest and latest moments of the Sassanid Empire, which stretched across the region from 224 to 651 CE. Among the sites are the dynasty founder Ardashir Papakan’s military headquarters and first capital, and a city and architectural structures of his successor, the ruler Shapur I. In Sarvestan, a monument dating into the Early Islamic period illustrates the transition from the Sassanid to the Islamic era.

The ancient cities of Ardashir Khurreh and Bishapur include the most significant remaining testimonies of the earliest moments of the Sassanid Empire, the commencement under Ardashir I and the establishment of power under both Ardashir I and his successor Shapur I. In locations strategically selected for defence purposes, the cities were planned in their surrounding environments and illustrate urban typologies, such as the circular shape of Ardashir Khurreh, which became influential to later Sassanid and Islamic cities. The surrounding landscape was imprinted with Sassanid testimonies, such as the reliefs and sculptures cut into the rock cliffs and the defensive structures protecting the cities. The architecture of the Sassanid monuments in the property further illustrates early examples of construction of domes with squinches on square spaces, such as in the chahar-taq buildings, where the four sides of the square room show arched openings: this architectural form turned into the most typical form of Sassanid religious architecture, relating closely to the expansion and stabilization of Zoroastrianism under Sassanid reign and continuing during the Islamic era thanks to its usage in religious and holy buildings such as mosques and tombs.

Criterion (ii): The Sassanid Archaeological Landscape of the Fars region was influenced by the Achaemenid and Parthian cultural and ritual traditions, and references their architectural and artistic approaches. This is illustrated in the rock-carving techniques of the reliefs in the Firuzabad and Bishapur components and the sculpture of Shapur I in Tang-e Chogan. Likewise, particularly in Bishapur, the property illustrates influences deriving from the encounter with Roman art and architecture, contemporaneous with it. The Sassanid urban plan of Ardashir Khurreh inspired city planning throughout the region well into the Islamic era and Sarvestan Monument demonstrates how Sassanid architectural language continued to be utilized in Early Islamic times.

Criterion (iii): The property bears an exceptional testimony to the Early Sassanid Civilization and its contribution to the distribution and establishment of Zoroastrianism. As for the architectural language, the chahar-taq form illustrates best the linkages of Zoroastrianism and Sassanid rule: the Sassanid Archaeological Landscape of Fars Region encompasses Zoroastrian monumental architecture from its very beginning with the Takht-e Neshin, its consolidation at Bishapur, here in particular with the fire temple formerly interpreted as Shapur’s Palace and its development during the Early Islamic time with the Sarvestan Monument. The layout and location of the two first Sassanid ruling cities are testimonies to the legitimization and hierarchy of power as well as ritual ceremonies.

Criterion (v): The Sassanid archaeological landscape represents a highly efficient system of land use and strategic utilization of natural topography in the creation of the earliest cultural centres of the Sassanid civilization. Using indigenous construction materials and based on optimal exploitation of the surrounding natural resources including mountains, plains and rivers, a diverse set of urban structures, castles, buildings, bas-reliefs and other relevant monuments took shape within the landscape. Overall the Sassanid Archaeological Landscape of Fars Region is an outstanding example of the traditional land-use of Fars region where water management plays a fundamental role, and in which the Sassanid foundation of inhabited settlements and monumental buildings integrates itself in the landscape.

The monuments of the Sassanid Archaeological Landscape of Fars Region, Islamic Republic of Iran, retain a high degree of integrity in visual and spatial terms. The property does not suffer from effects of development, except for a settlement expansion east of Ardashir Palace and a road construction at Bishapur. Both are controlled to prevent further expansion or similar developments.

The Sassanid archaeological sites, monuments and buildings are far from urban spaces and are strategically integrated into their surrounding topography, including straits, rivers, gorges and plains around them. Some of these landscape features, which carry attributes of the Outstanding Universal Value, are not yet included within the property boundaries and a boundary adjustment is foreseen to integrate separate serial components within the surrounding landscape.

The property is largely intact and most interventions which could have impacted the urban plans or would have changed historical construction materials or caused negative transformation in the setting and natural environment surrounding the monuments were avoided in accordance with the existing legal regulations.

Qal’e-ye Dokhtar, Ardashir Palace and Sarvestan, despite having been affected by past earthquakes and being subject to visible deterioration processes, can be considered authentic in form and design. Participation of traditional master workers familiar with the usage of traditional methods and construction materials has contributed to the preservation of authenticity. However, some of the restorations done on the structures at these sites, namely where wall facings have been applied to avoid crumbling of the core masonry, also include a large percentage of new materials, including plaster and black cement, with new stones used for the facing of the walls. The vault of the main ivan of Ardashir Palace in Firuzabad has been partly reconstructed for static reasons using concrete and stone facings.

The rock reliefs of Ardashir and those of Tang-e Chogan retain a largely authentic condition. Despite the transformation of the land due to agricultural activities, Ardashir Khurreh still preserves its authentic form and design. Nevertheless, this is rather vulnerable as it could change very quickly with adjunctions of parcels of land as a result of inheritance or other division which would affect the shape of the plots and could eventually remove part of the original design of the city. In general, the settings of most of the components still preserve their authentic aspects as they were during the Sassanid period.

Within the context of these designations, the State Party developed specific regulations, not only for the property areas but also for the buffer zones and, where existing, landscape zones. These are largely relevant. Merely at Ardashir Khurreh, the permissibility of agricultural use should be carefully considered and preceded by archaeological and geophysical surveys confirming the absence of underground archaeological remains.

The property is administered by a structure established for the purpose of its management, which is referred to as SALF Base (Sassanid Archaeological Landscape in the Fars Region Base). The Base reports to both the Deputy Director of Tourism and the Deputy Director for Cultural Heritage Conservation in ICHHTO but is coordinated primarily through the Cultural Heritage Conservation department. The Base is advised and guided by a Steering and a Technical Committee. The integrated management and conservation plan for the property, which shall integrate dedicated sections of risk preparedness, disaster response and a monitoring system, will be finalized.