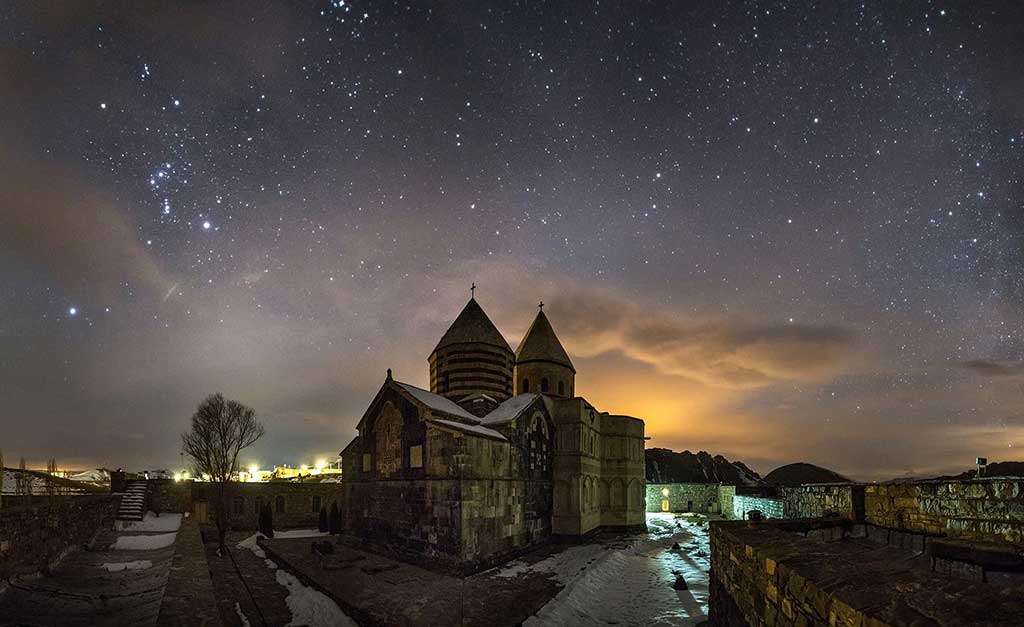 The Armenian Monastic Ensembles of Iran, in the north-west of the country, consists of three monastic ensembles of the Armenian Christian faith: St Thaddeus and St Stepanos and the Chapel of Dzordzor.

These edifices - the oldest of which, St Thaddeus, dates back to the 7th century – are examples of outstanding universal value of the Armenian architectural and decorative traditions.

They bear testimony to very important interchanges with the other regional cultures, in particular the Byzantine, Orthodox and Persian. Situated on the south-eastern fringe of the main zone of the Armenian cultural space, the monasteries constituted a major centre for the dissemination of that culture in the region. They are the last regional remains of this culture that are still in a satisfactory state of integrity and authenticity. Furthermore, as places of pilgrimage, the monastic ensembles are living witnesses of Armenian religious traditions through the centuries.

The Armenian monasteries of Iran have borne continuous testimony, since the origins of Christianity and certainly since the 7th century, to Armenian culture in its relations and contact with the Persian and later the Iranian civilisations.

They bear testimony to a very large and refined panorama of architectural and decorative content associated with Armenian culture, in interaction with other regional cultures: Byzantine, Orthodox, Assyrian, Persian and Muslim. The monasteries have survived some 2,000 years of destruction, both of human origin and as a result of natural disasters. They have been rebuilt several times in a spirit in keeping with Armenian cultural traditions.

Today they are the only important vestiges of Armenian culture in this region. Saint-Thaddeus, the presumed location of the tomb of the apostle of Jesus Christ, St. Thaddeus, has always been a place of high spiritual value for Christians and other inhabitants in the region. It is still today a living place of pilgrimage for the Armenian Church.

Criterion (ii): The Armenian monasteries of Iran illustrate the Outstanding Universal Value of Armenian architectural and decorative traditions. They bear testimony to very important cultural interchanges with the other regional cultures, in particular Byzantine, Orthodox and Persian.

Criterion (iii): Situated at the south-eastern limits of the main zone of Armenian culture, the monasteries were a major centre for its diffusion in the region. Today they are the last regional testimony of this culture in a satisfactory state of integrity and authenticity.

Criterion (vi): The monastic ensembles are the place of pilgrimage of the apostle St. Thaddeus, which bears an outstanding living testimony to Armenian religious traditions down the centuries.

The State Party has made a remarkable long-term effort regarding the restoration and conservation of the Armenian monastic ensembles in Iran. Their integrity and authenticity are satisfactory, and this includes the Chapel of Dzordzor, which (because of a dam construction project) was moved and then rebuilt with an evident concern to retain authenticity.

The legal protection in place is adequate. The monastic ensemble is currently in a good state of conservation. The management plan provides the necessary guarantees for the long-term conservation of the property and the expression of its Outstanding Universal Value.