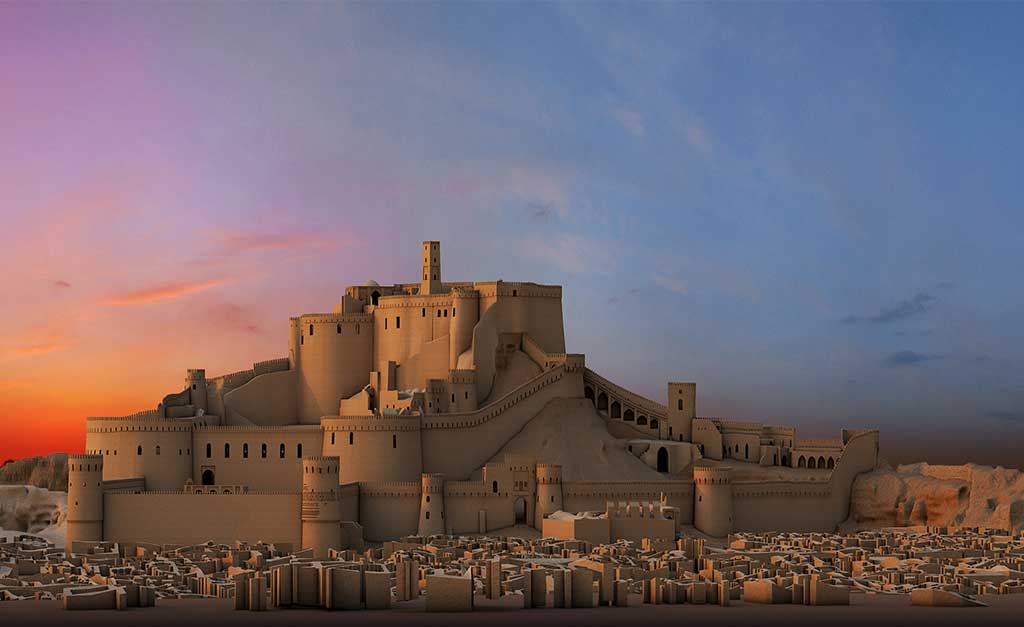 Bam is situated in a desert environment on the southern edge of the Iranian high plateau. The origins of Bam can be traced back to the Achaemenid period (6th to 4th centuries BC). Its heyday was from the 7th to 11th centuries, being at the crossroads of important trade routes and known for the production of silk and cotton garments. The existence of life in the oasis was based on the underground irrigation canals, the qanāts, of which Bam has preserved some of the earliest evidence in Iran. Arg-e Bam is the most representative example of a fortified medieval town built in vernacular technique using mud layers (Chineh ).

The property of Bam and its Cultural Landscape is located on the southern edge of the Iranian high plateau, in Kerman Province, in south-eastern Iran, close to the Pakistan border. Bam lies 1,060 metres above sea level in the centre of the valley dominated to the north by the Kafut Mountains and to the south by the Jebal-e Barez Mountains. This valley forms the wider cultural landscape of the Bam County. Beyond the mountains lies the vast Lut Desert of Central Iran. Water from the Jebal-e Barez Mountains supplies the seasonal Posht-e Rud River that skirts Bam City between Arg-e Bam and Qal’eh Doktar.

The Chelekhoneh River and its tributaries gather water from the central parts of the Jebal-e Barez Mountain range. It now runs northeast, although it formerly flowed through the Bam City until it was diverted by a dam into a new course that met with the Posht-e Rud northwest of Bam City. Water from the Kafut Mountains also supplies the catchment area.

The origins of the citadel of Bam, Arg-e Bam, can be traced back to the Achaemenid period (6th to 4th centuries BC) and even beyond. The heyday of the citadel was from the 7th to 11th centuries, being at the crossroads of important trade routes and known for the production of silk and cotton garments. The citadel, which contains the governor’s quarters and the fortified residential area, forms the central focus of a vast cultural landscape, which is marked by a series of forts and citadels, now in ruins. The existence of life in the oasis was based on the underground irrigation canals, the qanāts, of which Bam has preserved some of the earliest evidence in Iran and which continue to function till the present time. Arg-e Bam is the most representative example of a fortified medieval town built in vernacular technique using mud layers (Chineh), sun-dried mud bricks (khesht), and vaulted and domed structures. Outside the core area of Arg-e Bam, there are other protected historic structures which include Qal’eh Dokhtar (Maiden’s fortress, ca. 7th century), Emamzadeh Zeyd Mausoleum (11-12th century), and Emamzadeh Asiri Mausoleum (12th century and historic qanāt systems and cultivations southeast of the Arg.

Bam and its Cultural Landscape represents an outstanding example of an ancient fortified settlement that developed around the Iranian central plateau and is an exceptional testimony to the development of a trading settlement in the desert environment of the Central Asian region. This impressive construction undoubtedly represents the climax and is the most important achievement of its type not only in the area of Bam but also in a much wider cultural region of Western Asia. Bam is located in an oasis area, the existence of which has been based on the use of underground water canals, qanāts, and has preserved evidence of the technological development in the building and maintenance of the qanāts over more than two millennia. For centuries, Bam had a strategic location on the Silk Roads connecting it to Central Asia in the east, the Persian Gulf in the south, as well as Egypt in the west and it is an example of the interaction of the various influences.

The cultural landscape of Bam is an important representation of the interaction between man and nature and retains a rich resource of ancient canalisations, settlements and forts as landmarks and as a tangible evidence of the evolution of the area.

Criterion (ii): Bam developed at the crossroads of important trade routes at the southern side of the Iranian high plateau, and it became an outstanding example of the interaction of the various influences.

Criterion (iii): The Bam and its Cultural Landscape represent an exceptional testimony to the development of a trading settlement in the desert environment of the Central Asian region.

Criterion (iv): The city of Bam represents an outstanding example of a fortified settlement and citadel in the Central Asian region, based on the use mud layer technique (chineh) combined with mud bricks (khesht).

Criterion (v): The cultural landscape of Bam is an outstanding representation of the interaction of man and nature in a desert environment, using the qanats. The system is based on a strict social system with precise tasks and responsibilities, which have been maintained in use until the present, but has now become vulnerable to irreversible change.

Bam and its Cultural Landscape form an organically grown relict cultural landscape. The World Heritage property encompasses the central part of the oasis of Bam, including the Citadel of Bam and the area along the Bam Seismic Fault. This contains historical evidence of the evolution of qanat construction from the first millennium till the present. The inscribed property and the buffer zone are of sufficient size and encompass the attributes that sustain the Outstanding Universal Value of the property, including the elements that express the relationship between man and the environment.

In the Arg-e Bam, earthen structures have retained urban forms and type of construction which, in spite of requiring interventions as a result of the earthquake have still retained a high degree of integrity. The new urban master plan for the modern city of Bam, largely affected by the 2003 earthquake, will follow the traditional street pattern and overall garden city approach to maintain the character of the property.

The living cultural landscape retains a high level of integrity with the continued use and maintenance of the historic hydraulic systems qanāts and continued territorial land use for agricultural activities. The traditional visual relationship of the fortified ensemble with its setting is still preserved. However, there are challenges relating to new developments in industrial and residential areas developing in the outskirts of Bam city, which will need to be properly regulated and managed to preserve this relationship.

The property maintains several attributes that substantiate its authenticity. In regard to the historic fabric, although some deterioration existed and partial restorations were carried out between 1976 and 2003, these used traditional techniques and materials.

The 2003 earthquake caused the collapse of various sections of the Governor’s Quarters and the upper parts of the defence walls. Notwithstanding, much of the lost fabric was from modern restorations. The materials found at the older levels are well preserved and have now been revealed. The traditional culture for architecture and the city plan have also been preserved, including the continuity in workmanship and know-how for earthen architecture construction. To maintain the authenticity of the property, it will be important that interventions follow appropriate restoration principles and guidelines, in accordance to international doctrine, and in consideration to the original materials and techniques.

The setting has also maintained many of the historical features that speak to the integration of man and environment and other symbolic associations with the natural landscape. To retain the authenticity of this relationship, the management of the buffer zone will play a critical role, as