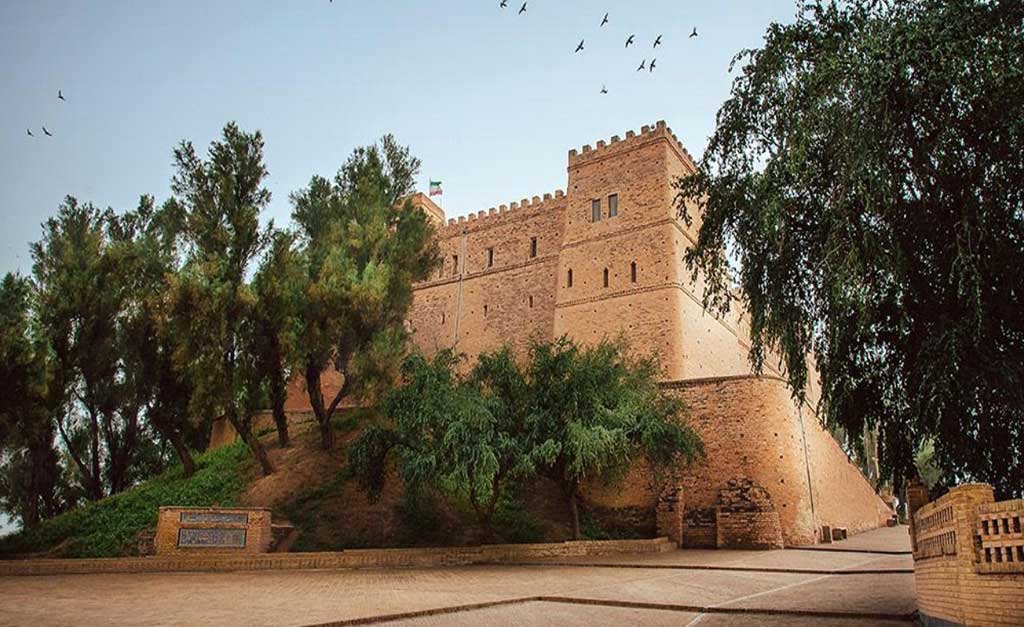 Located in the south-west of Iran, in the lower Zagros Mountains, the property encompasses a group of archaeological mounds rising on the eastern side of the Shavur River, as well as Ardeshir’s palace, on the opposite bank of the river. The excavated architectural monuments include administrative, residential and palatial structures. Susa contains several layers of superimposed urban settlements in a continuous succession from the late 5thmillennium BCE until the 13th century CE. The site bears exceptional testimony to the Elamite, Persian and Parthian cultural traditions, which have largely disappeared.

Located in the lower Zagros Mountains, in the Susiana plains between the Karkheh and Dez Rivers, Susa comprises a group of artificial archaeological mounds rising on the eastern side of the Shavur River, encompassing large excavated areas, as well as the remains of Artaxerxes' palace on the other side of the Shavur River. Susa developed as early as the late 5th millennium BCE as an important centre, presumably with religious importance, to soon become a commercial, administrative and political hub that enjoyed different cultural influences thanks to its strategic position along ancient trade routes. Archaeological research can trace in Susa the most complete series of data on the passage of the region from prehistory to history. Susa appears as the converging point of two great civilisations which reciprocally influenced each other: the Mesopotamian and the Iranian plateau civilisations. Susa’s long-lasting and prominent role in the region, either as the capital of the Elamites, or of the Achaemenid Empire, or as a strategic centre sought by neighbouring powers (e.g., Assyrian, Macedonian, Parthian, Sassanid) is witnessed by the abundant finds, of disparate provenance and of exceptional artistic or scientific interest, and by the administrative, religious, residential and palatial, as well as functional structures and traces of urban layout (e.g., the remains of the Haute Terrasse in the Acropolis, the Palace of Darius in the Apadana, the residential or production quarters, the Ardeshir Palace) that more than 150 years of archaeological investigations have revealed.

Criterion (i): Susa stands as one of the few ancient sites in the Middle East where two major social and cultural developments took place: the development of the early state, and urbanization. Susa is among the few sites in the Middle East where the dynamics and processes that led to these monumental human achievements has been documented, and still holds a huge body of important tangible evidence to understand better the early and mature stages of social, cultural and economic complexity. In its long history, Susa contributed to the development of urban planning and architectural design. The royal ensemble of the Palace of Darius and Apadana, with its tall hypostyle hall and porticos, lofty stone columns and gigantic capitals and column bases, and the orthostatic and ceramic wall decorations, together represent an innovative contribution to the creation of a new expression, characteristic of the Achaemenid Empire.

Criterion (ii): The proto-urban and urban site of Susa bears testimony, from the late 5th millennium BCE to the first millennium CE, to important interchanges of influences, resulting from ancient trade connections and cultural exchanges between different civilizations, namely the Mesopotamian and Elamite. Susa has been identified as the focal point of interaction and intersection between the nomadic and sedentary cultures. It played a key role in creating and expanding technological knowledge, and artistic, architectural and town planning concepts in the region. Through its sustained interaction with nearby regions, archaeological and architectural materials discovered at Susa exhibit a variety of styles and forms, shedding light on an international ancient city that both influenced and was imitated by its neighbours.

Criterion (iii): The remains of the ancient city of Susa bear exceptional testimony to successive ancient civilizations during more than six millennia, as well as having been the capital city of the Elamite and Achaemenid Empires. It contains 27 layers of superimposed urban settlements in a continuous succession from the late 5th millennium BCE until the 13th century CE. Susa is on the most ancient of the sites, where the processes of urbanization crystallized in the late 5th millennium BC. A decade of scientific excavations from 1968 to 1978, and philological works at Susa, also documented the development and changing character of this early urban centre throughout the millennia.

Criterion (iv): Susa is an outstanding and rare example of a type of urban settlement representing the beginnings of urban development in the proto-Elamite and Elamite periods, from the late fifth millennium BCE. Furthermore, from the sixth century BCE, as the administrative capital city of the Achaemenid Empire, Susa contributed to the creation of a new prototype of ceremonial architecture, which became a characteristic feature of the Iranian Plateau and its neighbouring lands.

The excavated site of the ancient urban and architectural remains of Susa is included within the boundaries of the property. Even though many of the finds are today exhibited in museums, Susa still includes the essential elements to express its Outstanding Universal Value. The property covers the known part of the ancient city, which is now protected against adverse development. Due to the high archaeological potential of the area that surrounds Susa, continuing archaeological research and documentation sustains the integrity of the property. The recent haphazard urban development of modern Shush threatens the edges and immediate setting of the property; however, strict regulations have been elaborated, integrated into the planning system and enforced. Their stringent implementation is crucial to maintaining the integrity of the property.

More than 150 years of archaeological research and historical sources confirm that the property encompasses the site of the ancient city of Susa. The material and form of the architectural remains are historically authentic, although many of the decorative elements are now deposited in museums for protection. As a protected archaeological property, Susa is being conserved using scientific and philological methods and approaches. Therefore, the excavated remains have been stabilized and conserved respecting their architectural and planning design as well as their building materials. From its initial formation and in the course of its development until its final decline, Susa has always remained on its present site; its environmental setting has, however, changed, with the hydraulic works carried out upstream of the Karkheh and the Shavur Rivers; however, these changes do not prevent the understanding of the role played by the environmental setting in the long-lasting prominence of Susa.

Susa is protected as a National monument and falls under the responsibility of the ICHHTO which protects and manages the property through its Susa Base. Regulations for the property and its buffer and landscape zones have been incorporated into the planning instruments as prevailing norms. Their stringent implementation is crucial to guaranteeing the adequate protection and preservation of Susa’s buried and unburied archaeological remains. Inter-institutional cooperation and coordination among existing instruments in the management of the property, and particularly of its immediate and wider setting, is fundamental to ensuring that urban growth respects the archaeological potential of the area and makes it an asset for a compatible and equitable development of Shush within its wider region.